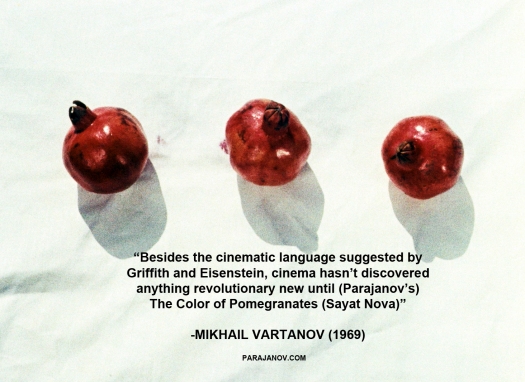 “Probably, besides the cinematic language suggested by Griffith and Eisenstein, the world cinema hasn’t discovered anything revolutionary new until Parajanov’s The Color of Pomegranates.” 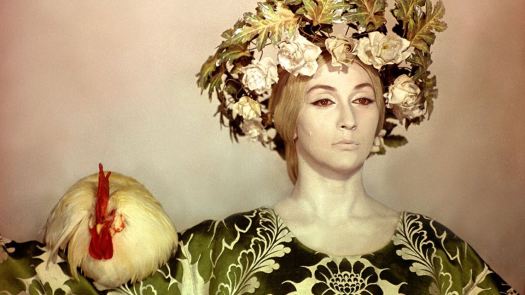 One of the greatest masterpieces of the 20th century, Sergei Parajanov‘s “Color of the Pomegranate”, a biography of the Armenian troubadour Sayat Nova (King of Song) reveals the poet’s life more through his poetry than a conventional narration of important events in Sayat Nova’s life. We see the poet grow up, fall in love, enter a monastery and die, but these incidents are depicted in the context of what are images from Sergei Paradjanov’s imagination and Sayat Nova’s poems, poems that are seen and rarely heard. Sofiko Chiaureli plays 6 roles, both male and female, and Sergei Parajanov writes, directs, edits, choreographs, works on costumes, design and decor and virtually every aspect of this revolutionary work void of any dialog or camera movement.

PARAJANOV.com | The Color of Pomegranates

PARAJANOV.com | The Color of Pomegranates

Parajanov-Vartanov Institute worked with Martin Scorsese‘s Film Foundation on the restoration of The Color of Pomegranates after a chance meeting during the esteemed 17th Busan International Film Festival’s Sergei Paradjanov and MIkhail Vartanov film retrospective and art exhibition.

The restored Color of Pomegranates (Sayat Nova) world premiered at the 67th Cannes Film Festival (Festival de Cannes) in France and, with Mikhail Vartanov‘s Parajanov: The Last Spring, at the 28th IL Cinema Ritrovato Film Festival in Italy where it was introduced by Olivia Harrison, the widow of The Beatles guitarist George Harrison whose foundation funded the restoration.

Martiros M. Vartanov, who worked on the restoration with L’Immagine Ritrovata, introduced the US-premiere at The Academy at LACMA series together with his last film.

(See also: The Resurrection of Sayat Nova, a film about the restoration)

Sergei Paradjanov’s restored Color of Pomegranates then returned to the New York Film Festival at the Lincoln Center where Martin Scorsese accepted the 2014 Parajanov-Vartanov Institute Award for championing the preservation of Sergei Paradjanov’s masterpiece (which first screened at NYFF 34 years earlier). NYFF hosted Parajanov with his film Ashik Kerib in 1988 (for the master’s only US appearance).

Buy Sergei Parajanov’s restored The Color of Pomegranates on a Criterion Bluray. The Bluray and DVD also include Mikhail Vartanov‘s rare first film The Color of Armenian Land (1969).