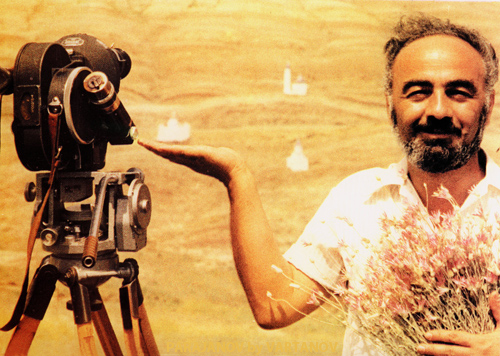 “Probably, besides the cinematic language suggested by Griffith and Eisenstein, the world cinema hasn’t discovered anything revolutionary new until (Paradjanov’s) The Color of Pomegranates…”

“In the temple of cinema there are images, light and reality. Sergei Parajanov was the master of that temple.”

One of the greatest masters of cinema, Sergei Parajanov created two masterpieces in a row, Shadows of Forgotten Ancestors (1964) and The Color of Pomegranates (1969), had such legendary fans as Fellini, Godard, and Tarkovsky, and was imprisoned three times. His artworks, and particularly his Mona Lisa collages, put him in the company of Picasso and Warhol. At least four countries – Armenia, Georgia, Ukraine and Russia – claim him as their own, and major directors from Hollywood to Iran, fashion designers from New York to Brazil, Pulitzer Prize winning scientists and superstar musicians like Madonna have all created work influenced and inspired by this genius.

Sergei Parajanov’s unmistakable films are rarely watched, often admired, and usually regarded as some of the most important movies of the 20th century. While equally important, Sergei Parajanov is significantly less known than his peers: Fellini, Tarkovsky, Antonioni, Godard, though, at various times, these great filmmakers have called Parajanov a “genius,” a “master” and a “magician.”

In Dovzhenko’s homeland, Parajanov created his first masterpiece, Shadows of Forgotten Ancestors (1964), which brought him worldwide fame. The Soviet authorities blacklisted him for his support of the Ukrainian dissidents and nationalists and all his projects in the Ukraine were jeopardized, notably the unfinished “Kiev Frescos” (1966).

Paradjanov next came to his ancestral homeland Armenia to direct Sayat Nova and met the noted recent V.G.I.K. graduate Mikhail Vartanov, a classmate of Aleksandr Antipenko who had lensed “Kiev Frescoes”. Impressed with Vartanov’s comments about the screenplay and style of Sayat Nova, Parajanov became close friends with him and considered his candidacy as the film’s cinematographer. Armenfilm Studio assigned Vartanov to save several failing projects at its documentary department, however, and Parajanov brought from Ukraine the great cinematographer Suren Shakhbazian, also a close friend (who had lensed his first feature Andriesh). Even though Sayat Nova (1969), better known as The Color of Pomegranates, turned out to be Parajanov’s second masterpiece in a row, it was recut by the Soviet censors, but not merely because it was misunderstood.

Parajanov paid a heavy price for his outspoken criticism of Soviet cinema and the authorities: Soviet movie studios rejected all his projects after The Color of Pomegranates, and he was arrested in 1973 and sentenced to 5 years in a Ukrainian prison in 1974. A wave of international protests by the likes of Truffaut, Bunuel, Pasolini and Antonioni followed — in Europe and the United States, but also in the Soviet Union itself, where it was actually dangerous. Notably, his close friend Mikhail Vartanov, who had been blacklisted for portraying Paradjanov in the documentary “The Color of Armenian Land” (1969), was fired from Armenia’s only film studio (four months after Parajanov’s imprisonment) because he petitioned the Prosecutor General of Ukraine to release Parajanov, as evidenced by the recently declassified documents obtained by Parajanov’s wife Svetlana. Finally, at the initiative of poet Mayakovsky’s lover Lilya Brik, the French communist poet Louis Aragon personally petitioned the Soviet leader Brezhnev who released Parajanov in 1977.

Paradjanov returned to his hometown of Tbilisi, Replublic of Georgia, but remained unemployed. During this time he created a large number of artworks, notably his extraordinary Mona Lisa collages. At last, 15 years after The Color of Pomegranates, thanks to the efforts of the Georgian intelligentsia, Parajanov was permitted to direct. He created his Georgian masterpiece The Legend of Suram Fortress (1984), but had to share the credit with the renowned actor Dodo Abashidze (who starred in but didn’t direct the picture). Not coincidentally, in 1983, Paradjanov’s friend Mikhail Vartanov was also assigned his first film as a director in nearly 10 years (which was one of the reasons he couldn’t accept Parajanov’s renewed offer to be his cinematographer).

Gorbachev’s reforms allowed Parajanov to leave the Iron Curtain for the first time and he attended the prestigious Rotterdam International Film Festival where The Legend of Suram Fortress won the Best Innovative Film Award. The next feature Paradjanov directed was his Azeri masterpiece Ashik Kerib (1988), which he dedicated to his friend Andrei Tarkovsky (who died in 1986, and whose Ivan’s Childhood had inspired Paradjanov to break free of the sanctioned Socialist Realism style in 1964). Ashik Kerib was also selected by prestigious festivals, Venice and New York, and won the European Film Academy Award.

In 1989 Parajanov began the shooting of The Confession, an autobiographical picture, but it remained unfinished due to his hospitalization. That same year, Parajanov assigned his sceenplay of The Treasures at Mount Ararat to an Eastern-European producer and instructed him to hire Mikhail Vartanov to direct the film, but, after preparatory work, the producer failed to meet his contractual obligations, and that project also remained unfinished. Vartanov independently produced Parajanov: The Last Spring that included the original camera negative of The Confession. Shortly after receiving the honorary titles of the People’s Artist of Ukraine and the People’s Artist of Armenia, Parajanov passed away on July 20, 1990. “Cinema lost one of its magicians,” wrote Fellini, Tonino Guerra, Moravia, Rosi, Masina, Mastroianni and Bertollucci, who, with the rest of the world, mourned Parajanov’s untimely death at 66.

ARABESQUES ON THE PIROSMANI THEME 1986

CHILDREN TO KOMITAS 1968
Parajanov made this documentary for UNICEF but it has been lost.

SAYAT NOVA or THE COLOR OF POMEGRANATES 1968

Studies at the Russian language school 42 in Tbilisi.

Enters the Institute of Railway Transport, but soon leaves for the Conservatory of Music. Enters the world’s oldest film school, the Institute of Cinema (V.G.I.K), in Moscow (the workshop of professor Igor Savchenko, later led by Dovzhenko) in 1945.

Spends seven months in a Tbilisi jail in 1948 on homosexuality charges. Marries a Tatar girl, Nigyar Kerimova, in 1951, but she is murdered a year later by her relatives for marrying outside her religion. Parajanov graduates from VGIK with a (short) thesis film A Moldavian Tale (lost).

Remakes A Moldavian Tale as a feature Andriesh (co-directed with Yakov Bazelyan). Marries a Ukrainian girl, Svetlana Sherbatiuk in 1955, who gives birth to their son Suren in 1958. Parajanov shoots several documentaries and features, and divorces in 1962.

Directs his first masterpiece Shadows of Forgotten Ancestors, followed by Kiev Frescoes, which gets shut down.

Directs his second masterpieces Sayat Nova (The Color of Pomegranates) (after the documentary (Hokop Hovnatanian) in 1967 in Armenia. Becomes friends with Mikhail Vartanov who is blacklisted for portraying him in The Color of Armenian Land. Parajanov criticizes the state of Soviet cinema and the authorities during a speech in Minsk, Belarus (recorded by KGB). Arrested in Ukraine in 1973.

Sentenced to 5 years in a Ukrainian prison on numerous trumped-up charges. Mikhail Vartanov is fired for petitioning the Prosecutor General of Ukraine to release Parajanov. Louis Aragon petitions and Leonid Brezhnev frees Parajanov in December 1977.

Parajanov returns to Tbilisi. Arrested there in 1982 on charges of bribery, released 10 months later.

Directs The Legend of Surami Fortress and wins at Rotterdam. Opens the first major exhibition of his artworks in Tbilisi in 1985. Directs the documentary on Pirosmani (1986). Directs Ashik Kerib which wins the European Film Academy Award.

Begins the shooting of The Confession but it remains unfinished due to his hospitalization. Mikhail Vartanov starts the independently produced Parajanov: The Last Spring. Parajanov passes away on July 20, 1990, and is laid to rest at Armenia’s Pantheon, where Komitas, Aram Khachaturian and William Saroyan also rest in peace.

Parajanov Museum opens in Armenia’s capital in 1991. Mikhail Vartanov’s Parajanov: The Last Spring (1992), in which survives the original camera negative of the unfinished Confession, receives the Russian Academy of Cinema Arts Award. The website Parajanov.com is thought up in 1995 (concieved in 1999 and born in 2001). Parajanov statues are unvailed at Ukraine’s Dovzhenko Film Studios in 1997 and at his hometown of Tbilisi, Republic of Georgia, in 2004.

Parajanov and Vartanov families come together to establish the Parajanov-Vartanov Institute in Hollywood.

The first joint Parajanov and Vartanov retrospective and exhibition is organized by the prestigious Busan International Film Festival in South Korea. Parajanov-Vartanov Institute works with The Film Foundation/World Cinema Project on the restoration of The Color of Pomegranates, which premieres at the world’s preeminent Festival de Cannes. Martin Scorsese accepts the 2014 Parajanov-Vartanov Institute Award on behalf of his Film Foundation for the restoration of the masterpiece.

The Criterion Collection’s highly anticipated Blu-ray release includes the restored masterpiece The Colour of Pomegranates by Paradjanov with Vartanov’s The Color of Armenian Land suppressed in 1969 and available for the first time in 49 years.